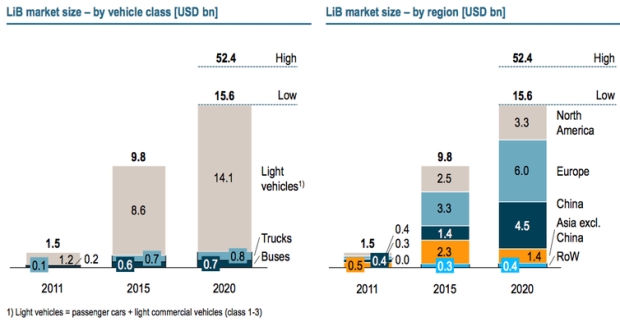 After a year and a half of two mainstream electric vehicles hitting the market, I think it is safe to say that sales aren’t panning out how automakers had hoped. High prices, short range, and a down economy have old made electric cars a hard sell. That means all of the electric battery makers out there aren’t going to have the volume they were depending on. Lithium-ion battery overcapacity and company consolidation is coming, and coming soon.

It’s more bad news for the electric car industry. “Overcapacity” and “consolidation” is corporate speak for too much product and not enough customers. Companies will merge or die, which means more jobs lost, feeding more ammo to the enemies of electric vehicles. It also means some government loans might not ever be paid back in full.

The study, done by Roland Berger Strategy Consultants (RBSC) looks at the lithium-ion battery market and sees that oversaturation is inevitable. RBSC is considered one of Europe’s top-three consulting firms, and they pick five companies who they see as coming out on top when the dust settles.