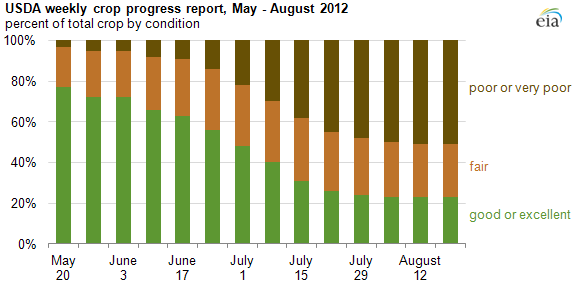 The U.S. Department of Agriculture (USDA) has reported a significant rise in the proportion of poor and very poor corn crops this summer, due largely to the extreme drought across much of the center of the nation. The corn crop in the affected region is a main feedstock for ethanol, which is blended into gasoline.

The U.S. Drought Monitor, a joint publication of USDA and the National Oceanic and Atmospheric Administration (NOAA), is currently reporting that large areas of the Midwest and Great Plains regions, which are substantial corn-producing areas, are experiencing significant drought conditions. Analyzing Drought Monitor data, the USDA’s Agricultural Weather and Drought Update for August 16 reported that 85% of the U.S. corn crop is located within a drought area, with nearly half of the crop area experiencing extreme or exceptional drought levels, their most severe designations. The map below illustrates the location of U.S. drought areas superimposed on major and minor corn-growing areas.