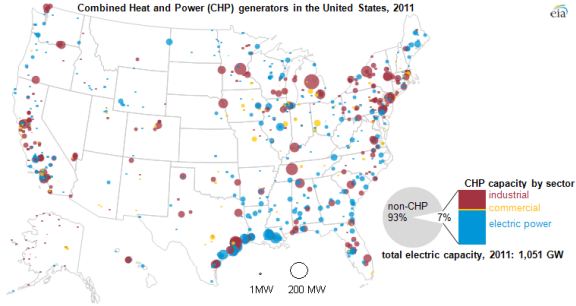 Combined heat and power (CHP), also called cogeneration, is an efficient approach to generating electric power and useful thermal energy for heating or cooling from a single fuel source. Instead of purchasing electricity from the grid and producing heat in an on-site furnace or boiler, a CHP generator provides both energy services in one energy-efficient step.

At the end of 2011, there were nearly 70 gigawatts (GW) of combined heat and power (CHP) generating capacity spread across the United States, accounting for almost 7% of total U.S. capacity, with 25 GW in the industrial sector, 2 GW in the commercial sector, and 43 GW in the electric power sector. In 2011, the average capacity factor for generators at industrial CHP plants was 57%, the equivalent of running at full capacity 57% of the time.

CHP facilities tend to be built in conjunction with certain industries that have heat or steam demands. For example, the map above shows a concentration of CHP units along the Gulf Coast, where many cogeneration plants are located near refineries and chemical plants. A number of smaller installations are located near pulp and paper mills in the South, in northern Wisconsin, and in Maine, burning the wood waste byproducts as fuel. CHP installations are also common in states with a history of utility regulation that is favorable toward CHP, such as California and New York.