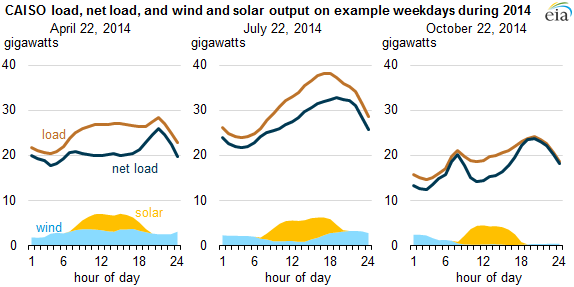 As more solar and wind electric generating capacity is added in California, the California Independent System Operator (CAISO), the electric grid operator for most of the state, is facing an increasingly different net load shape. Net load—the total electric demand in the system minus wind and solar generation—represents the demand that CAISO must meet with other, dispatchable sources such as natural gas, hydropower, and imported electricity from outside the system.

Wind and solar plants do not incur any fuel costs to generate electricity, and, when available, they are among the first resources that grid operators use. Utility-scale solar has exhibited particularly significant growth in the past year, with hourly solar output reaching nearly 5 gigawatts (GW) by the end of September 2014. This amount represents more than 10% of the system’s 2014 year-to-date hourly peak demand, and it is more than two-thirds higher than the peak hourly solar output level in 2013.

via Solar And Wind Power Are Changing Net Load Shapes In CA.