We Are Witnessing A Fundamental Change In The Oil Sector 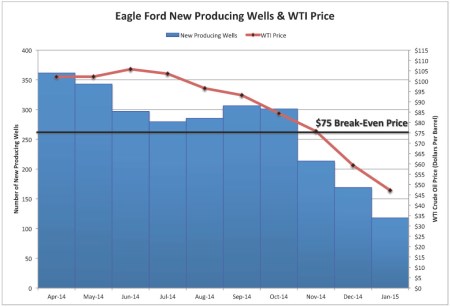 It is not because of decreased rig count. It is because cash flow at current oil prices is too low to complete most wells being drilled.

The implications are profound. Production will decline by several hundred thousand barrels per day before the effect of reduced rig count is fully seen. Unless oil prices rebound above $75 or $85 per barrel, the rig count won’t matter because there will not be enough money to complete more wells than are being completed today.

Tight oil production in the Eagle Ford, Bakken and Permian basin plays declined approximately 111,000 barrels of oil per day in January. These declines are part of a systematic decrease in the number of new producing wells added since oil prices fell below $90 per barrel in October 2014 (Figure 1).

via We Are Witnessing A Fundamental Change In The Oil Sector.