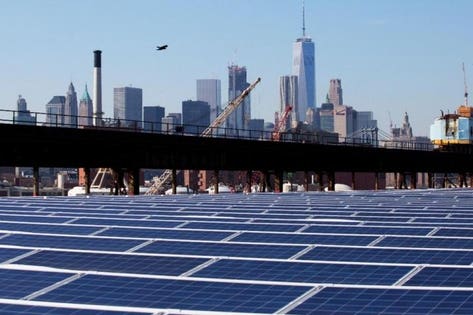 More money was invested in solar power in 2017 than in coal, gas and nuclear power combined, according to a new report for the United Nations Environment Programme (UNEP).

The report says that global investment in solar rose 18% to $160.8 billion, driven by the Chinese market, which was responsible for more than half of the world’s 98GW of new solar capacity.

Solar power made up 57% of last year’s total for all renewables (excluding large hydro) of $279.8 billion, and it towered above new investment in coal and gas generation capacity, at an estimated $103 billion.

A record 157GW of renewable power were commissioned last year, up from 143GW in 2016 and far higher than the net 70GW of fossil-fuel generating capacity added (after adjusting for the closure of some existing plants) during the same period.

The Global Trends in Renewable Energy Investment 2018 report, released by UNEP and Bloomberg New Energy Finance, finds that falling costs for solar electricity, and to some extent wind power, are continuing to drive deployment of renewable technologies.

A separate report from the International Renewable Energy Agency said that renewable capacity including large hydro grew 167GW, or 8.3%.

“ The world added more solar capacity than coal, gas, and nuclear plants combined ,” said Nils Stieglitz, President of Frankfurt School of Finance & Management. “This shows where we are heading, although the fact that renewables altogether are still far from providing the majority of electricity means that we still have a long way to go.” In addition to the rapid growth of the solar PV market, the amount of wind power capacity grew by 10%, IRENA said.

Last year was the eighth in a row in which global investment in renewables, excluding large hydropower, exceeded $200 billion – and since 2004, the world has invested $2.9 trillion in these green energy sources, the study found.

“This latest data confirms that the global energy transition continues to move forward at a fast pace, thanks to rapidly falling prices, technology improvements and an increasingly favourable policy environment, said IRENA Director-General Adnan Z. Amin. “Renewable energy is now the solution for countries looking to support economic growth and job creation, just as it is for those seeking to limit carbon emissions, expand energy access, reduce air pollution and improve energy security.”

Chinese investment in solar jumped by 58% to $86.5 billion, leading to the addition of 53GW of capacity. China, the world’s biggest emitter, has set itself the target of sourcing a fifth of its electricity by 2030. Its investment in all renewable technologies was a record $126.6 billion, 31% higher than the year before.

Asia as a whole accounted for almost two thirds of new capacity, with a tenth of the global total coming from India, mostly in solar and wind.

The burgeoning renewable power market came in spite of the anti-clean energy sentiment of the administration of President Donald Trump and significant falls in investment in markets such as the UK. US investment fell 6% to $40.5 billion while European funding slipped by 36% to $40.9 billion, mainly because of a 65% drop-off in the U.K. to $7.6 billion and a 35% decline to $10.4 billion in Germany. Japan followed a similar trend in Japan, which dropped off 28% to $13.4 billion.

Angus McCrone, Chief Editor of Bloomberg New Energy Finance and lead author of the UNEP report, said: “In countries that saw lower investment, it generally reflected a mixture of changes in policy support, the timing of large project financings, such as in offshore wind, and lower capital costs per megawatt.”