A new study of 3,000 power companies across the globe has found that only a handful have been cutting their fossil fuel capacity over the last two decades.

Much of the new renewable capacity being built around the world is being offset by new coal and gas capacity, leaving the global generation mix more or less how it was in 2000.

Even those utilities and independent power producers (IPPs) prioritizing renewables are adding further natural gas and coal capacity, in most cases. Many companies face the prospect of gas generation assets being stranded unless carbon capture and storage technology becomes widespread soon, according to research by Oxford University’s Smith School of Enterprise and the Environment and published in Nature Energy on Monday.

The research used machine learning to look for trends in the portfolios of companies between 2000-2018. It identified four clusters that the companies, large and small, fell into. Data was provided by S&P.

“This research highlights a worrying gap between what is needed to stop global warming, and what actions are being taken by the utility sector,” said Galina Alova, study author and researcher at Smith School of Enterprise and the Environment, in a statement. “Although there have been a few high-profile examples of individual electric utilities investing in renewables, this study shows that overall, the sector is making the transition to clean energy slowly or not at all.”

Speaking to GTM, Alova said the results among those pushing renewables hardest were counterintuitive.

“Although companies might be growing renewables at a faster rate than gas or coal, the majority are still growing those fossil fuels, predominantly gas, as well,” she said.

That dash for gas increases the risk of assets being stranded in the event of decarbonization being pressed along by governments and regulators.

“A big chunk of their portfolios might become obsolete,” warns Alova. “What I’m also finding is that quite a significant share of the fossil fuel-based capacity has been added in the last 10 years…They are locking themselves into this model for two decades. They are going to have to retire [plants] early or make use of the carbon capture and storage solutions at much greater scale and is now happening."

While many gas additions are touted as a bridge fuel toward more renewables, Alova said the size of the global gas fleet far exceeds what is needed to balance renewable-based grids.

As of 2018, IPPs owned three-quarters of the world’s non-hydro renewable capacity and utilities just 19 percent.

What comes next for utilities in transition

Of course, many companies in the power sector have only recently set out on the decarbonization pathway; a study looking at the 2000-2018 period might be expected to miss some of that. However, Alova also split the 18 year-period into three blocks of six years. Worryingly, even the most recent of those three periods does not show a substantial switch to renewables compared to the period before.

Many utilities that have made major decarbonization commitments have little to show for it today, and on an industry-wide basis, the shift toward renewables is barely discernible, the research finds. 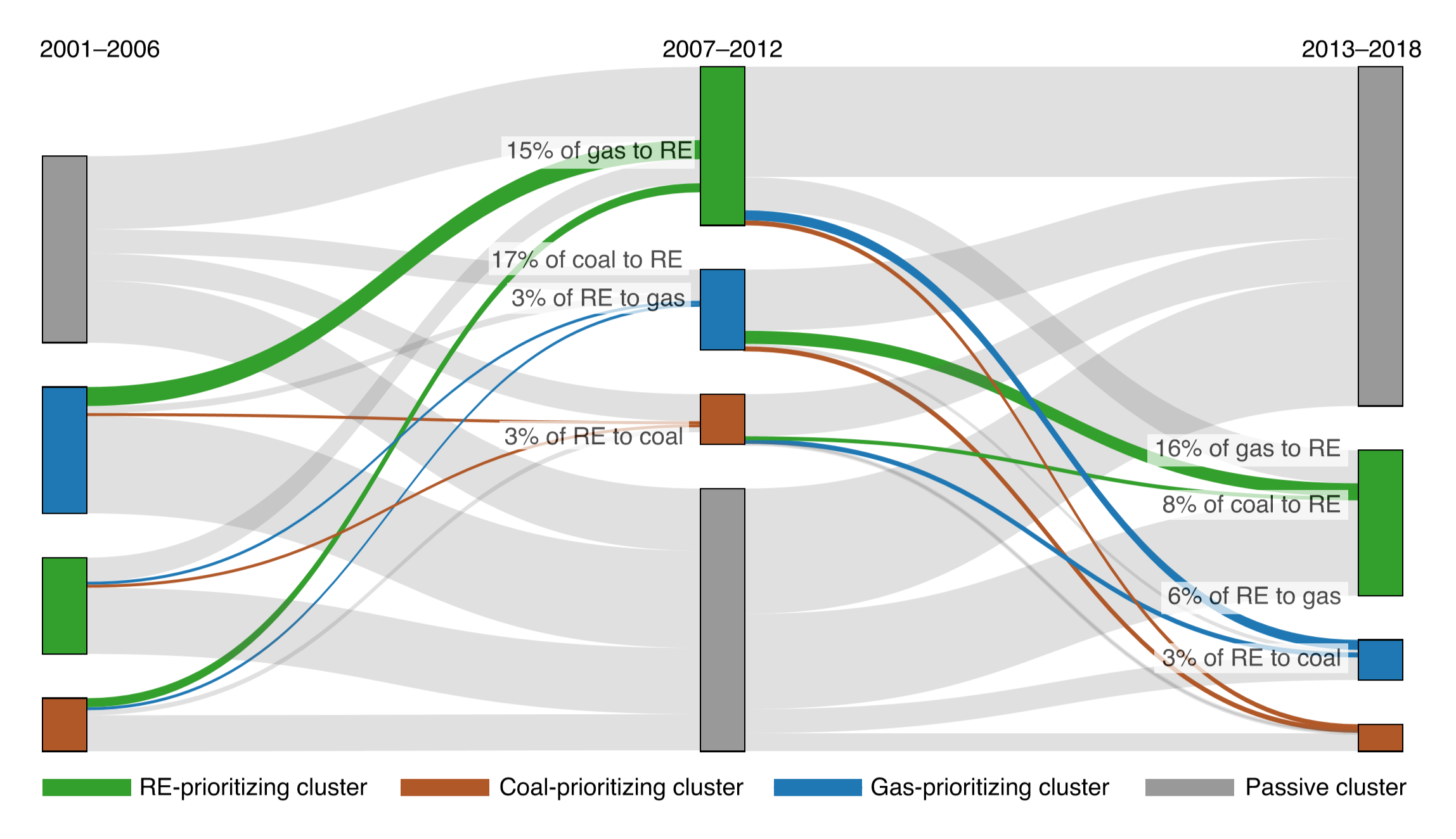 Even split into three six-year periods, there is still no evidence of a shift to renewables. (Credit: Nature Energy/Galina Alova)

Since 2018, when the dataset used in the study ends, several major European utilities have revealed plans to double-down on renewables, including Iberdrola and EDF. A growing number of U.S. utilities have set net-zero carbon targets for mid-century, including Duke Energy and Southern Company. But whether — and how quickly — they will wean themselves off gas remains an open question.

Even utilities with aggressive renewables programs still have large portfolios of fossil fuel assets. German utility RWE now has 9 gigawatts of installed wind and solar capacity and a development pipeline of 24.7 gigawatts, and a stated goal to become a “globally leading company” in renewables.

But RWE still has 14 gigawatts of gas capacity and another 14 gigawatts coal capacity, dwarfing its existing renewables base. The coal capacity will be phased out by 2038 at the latest under Germany’s coal exit plans but RWE has no explicit plans for ditching its gas plants.

European utilities are further along in their transition than those in Asia. Two-thirds of the companies prioritizing renewables were in Europe and North America. But even in those regions, Alova warns that many companies are still in the very early stages of their transition.

“Yes, renewables capacity is growing thanks to utilities, and especially to IPPs, but utilities are also adding more fossil fuels. That’s the key issue here — that’s why it’s slow,” she said.