How Coal-Loving Australia Became the Leader in Rooftop Solar 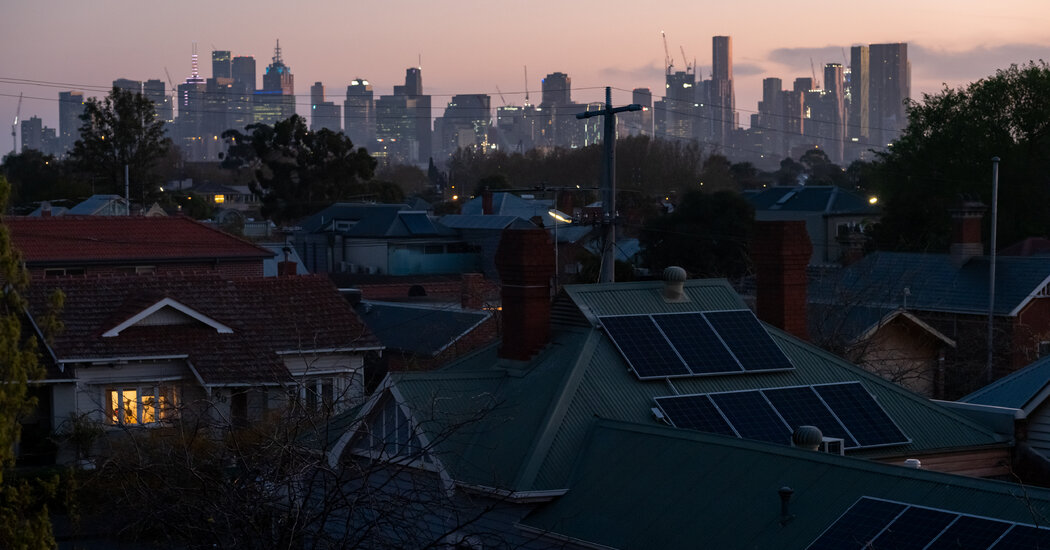 Wildfires in the West

Solar panels on homes in Northcote, one of Melbourne’s inner suburbs.Credit…Alana Holmberg for The New York Times

By Livia Albeck-Ripka and Ivan Penn

CAIRNS, Australia — Australia is the world’s second-largest exporter of coal, which plays an outsize role in its economy and politics. But the country has also quietly become a renewable energy powerhouse.

About one in four Australian homes have rooftop solar panels, a larger share than in any other major economy, and the rate of installations far outpaces the global average. The country is well ahead of Germany, Japan and California, which are widely considered leaders in clean energy. In California, which leads U.S. states in the use of solar power, less than 10 percent of utility customers have rooftop solar panels.

Most Australians who have embraced solar do not appear to have done so for altruistic reasons like wanting to fight climate change. Many are responding to incentives offered by state governments in the absence of a coordinated federal approach, a sharp drop in the price of solar panels in recent years and an increase in electricity rates.

Politically conservative homeowners have also embraced solar to become less reliant on the electricity grid in keeping with the high value many Australians place on rugged individualism.

In two of the country’s most populous states — Queensland, a conservative stronghold, and New South Wales, home to left-leaning Sydney — as many as half of homes have solar panels.

“That’s one of the reasons we’ve got the highest penetration of rooftop solar anywhere on the planet,” he added. “People are doing that because they want to save money.”

Australia has limited federal targets to curb carbon emissions, and its prime minister, Scott Morrison, has championed the coal industry, which last year exported more coal than every other country except Indonesia, according to the International Energy Agency. Last year, the government approved a major project to send coal to India.

Those incentives kick-started the solar boom, and rooftop solar regularly provides about 5 percent of Australia’s electricity, compared with just under 1 percent in the United States.

“Coal is still a key generator there, but there are times when rooftop solar is contributing over 6 percent of generation,” said Rishab Krishna Shrestha, a research analyst at Wood MacKenzie Power and Renewables.

The uptake has been especially high in Queensland, which makes up a big chunk of the country’s northeast and includes Cairns and Brisbane. The state has hot, humid weather similar to Florida’s and also calls itself the Sunshine State.

Peter Row of Bundaberg, a city just over 200 miles north of Brisbane that had the most rooftop solar installations last year in Australia, bought a typical 6.57-kilowatt system for his home after he grew tired of his rising electricity bill. Before he installed the $3,000 system, Mr. Row’s monthly bill usually came to about $190. Since then, the electric company has been crediting him an average of about $30 a month because he is generating more electricity than he is using.

“I hate the heat, so air conditioning is really important to me,” said Mr. Row, 59, who is semiretired and runs a small business from home. He and his wife try to run their most energy-intensive appliances during the sunniest parts of the day. “Normally, if you run air conditioning in summer, the bill is incredibly high.”

Mr. Row believes the climate is changing but, like many other conservatives, isn’t sure how much of the change is caused by humans, he said. “I don’t think renewables are the total answer yet,” he said.

Another reason Australia has rapidly expanded rooftop solar is that its states have sought to streamline building codes and make it easier to obtain permits. In the United States, municipalities tend to control codes and permitting, and many have not eased the way for rooftop solar, making installations more expensive and time consuming.

“What can California do to get to 30 percent penetration?” said Bernadette Del Chiaro, executive director of the California Solar and Storage Association. “Cut the red tape.”

Despite the growth of solar, Australia’s approach to the electric system has weaknesses, too, as customers face frequent blackouts. Experts blame an unreliable grid, strains on the system from record heat and damage to utility equipment from wildfires.

The growth of rooftop solar itself has caused some problems. Traditionally, power plants supplied electricity and homes used it, making it easy for officials to manage the grid. Now many homeowners are both consumers and providers of electricity, depending on the time of the day. That has forced grid managers to line up power plants that can ramp up or down more quickly to balance supply and demand.

“One of the bigger challenges that’s arising is that the electricity grid just wasn’t designed and built for high levels of rooftop solar,” said Kane Thornton, chief executive at the Clean Energy Council, the country’s renewable energy industry association. “It was designed for coal-fired power stations. We’re seeing many of the rules, and the grid itself, are needing to be reformed.”

More than half of the roughly two dozen coal-fired plants in operation are expected to be retired within 15 years, and it is not clear what will replace them. While environmentalists want more renewable energy, conservative lawmakers assert that the country needs to keep using coal.

“We’ve got to be realistic when we’re making transitions,” said Warren Entsch, a member of Parliament from Queensland in the governing Liberal Party, Australia’s equivalent of the Republican Party. “Coal is going to be part of our economy for, I believe, a long time into the future.”

Mr. Entsch is a special envoy to the Great Barrier Reef, off Queensland. He only recently acknowledged that climate change was the primary threat to the reef.

The recent rolling blackouts in California, the first since an energy crisis two decades ago, highlight the dangers posed by climate change and a rapid switch to renewable energy. Hotter weather can increase demand for electricity while the supply from a grid that relies too much on solar panels and wind turbines can become erratic, producing less power on cloudy and breezeless days.

As the price of renewable energy has plunged, coal-fired and natural gas power plants have increasingly struggled to compete, and some have shut down or sought bankruptcy protection.

As Australia, California and other parts of the world seek to increase their use of renewable energy, they will have to invest a lot more in batteries or other forms of energy storage, experts said.

In Australia, battery prices are expected to fall 10 to 15 percent this year, according to Warwick Johnston of SunWiz, a consulting firm. That is driving interest: There were more than 70,000 home battery systems in the country last year, and Mr. Johnston expects that 28,000 more will be installed this year.

Eytan Lenko, the executive chair of Beyond Zero Emissions, a climate research and advocacy organization, installed a 17-kilowatt solar system last year along with a battery at his home in Melbourne.

“We’re easily generating way more than what were using,” Mr. Lenko said, adding that the battery had helped keep the lights on during a storm in August that caused a citywide blackout. Climate change, he said, “is going to create more of these storms.”

Still, batteries typically provide power for up to only five hours at a time. That has limited their use, especially by electric utilities.

“This is the economically rational position to take,” he said. “Those people arguing for coal, gas and nuclear are actually arguing for more expensive, dirtier energy. The future is not those things.”

via NYT > Climate and Environment https://ift.tt/3i7nxLu