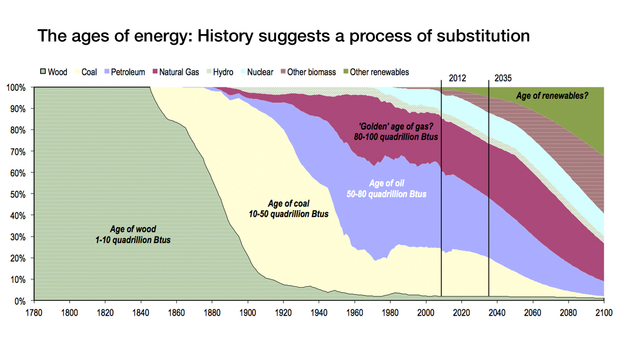 I hope you’re sitting down. Republicans and Democrats agree on something, at least nominally. It’s called an “all of the above” energy policy. That phrase occurs in both White House policy pronouncements and the 2012 Republican platform, meaning basically that the U.S. should pursue all of the energy options favored by whoever\’s in power. The parties differ on details, but, you know, “details.”

Bipartisan agreement is a rare thing, and yet it’s still not nearly as rare as the notion of having multiple energy choices in the first place. For 200 years the world burned wood, then coal, then oil. Now toss in gas, nuclear, hydropower and renewable power generated from wind, sun, water and earth. Judging by the projections of Citi Research, above, these options will be with us for some time.

via History Contradicts the U.S.’s ‘All of the Above’ Energy Strategy – Bloomberg.