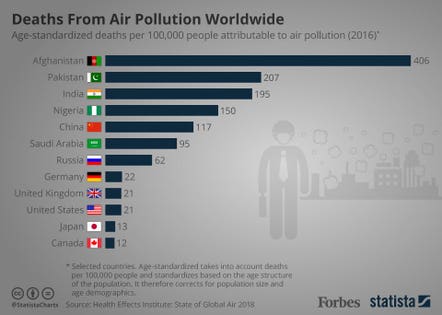 Age-standardized deaths per 100,000 people attributable to air pollution in 2016.

The annual State of Global Air Report was published on Tuesday by the Health Effects Institute (HEI) and it found that over 95 percent of the world’s population is breathing unhealthy air. Long-term exposure to air pollution contributed to the deaths of 6.1 million people in 2016 with strokes, heart attacks, lung disease and lung cancer causing many of them. Air pollution is now the fourth-highest cause of death worldwide, trailing smoking, high blood pressure and diet, with the majority of deaths recorded in poorer nations.

India and China lead the world in the total number of deaths attributable to air pollution in 2016 with 1.61 and 1.58 million respectively. However, when it comes to the number of age-standardized deaths per 100,000 of the population, the story is very different. As can be seen from the following infographic which lists a selection of countries from HEI’s report, Afghanistan had a far higher death rate per 100,000 inhabitants than India in 2016. In fact, the air people breath in Afghanistan is far more likely to cause them harm than an insurgent attack or air strike.

In the Afghan capital, the situation has become critical with old generators burning wood and plastic belching out smoke that mixes with lead-filled emissions from vehicles clogging the streets. As toxic as the air has become in Kabul, the problem is also manifesting itself in rural areas where people burn solid fuels for cooking and heating in their homes. That isn’t just an Afghan problem; it occurs in poor countries everywhere. While the stereotypical image of air pollution focuses on smog, factories and traffic in Asia’s economic behemoths, much of it emanates from the simple countryside stove or generator. According to HEI, more than a third of the global population is exposed to household air pollution and for them, fine particulate matter levels can exceed air quality guidelines by as much as 20 times.

The infographic also illustrates a striking gap between the most and least polluted air on the planet. While developed nations have been taking action to clean their air, much of the developing world has now fallen behind, a fact that’s evident in the death rate. As grim as the situation may seem, China is having success introducing tougher pollution controls. The number of people exposed to indoor air pollution has also fallen steadily from an estimated 3.6 billion in 1990 to 2.4 billion today despite the global population increasing. India has proven a notable example in combatting indoor air pollution by expanding and modernizing its electricity network as well as providing LPG as a cooking fuel.

Age-standardized deaths per 100,000 people attributable to air pollution in 2016.