Where Are All the Non-Wires Alternatives?

Earlier this month, Washington, D.C.-based Pepco became the latest United States utility to seek out non-wires alternatives (NWAs) to address an upcoming constraint on its network.

In early August, the Exelon subsidiary called on distributed energy developers and other stakeholders to propose alternatives to installing a fifth transformer at one of its substations. The existing transformers are forecasted to exceed their firm capacity by 2026.

Will any of the proposals slated to be submitted to Pepco early next year succeed?

Only time will tell, but a new Wood Mackenzie research report finds that on average, NWA opportunities proposed in the United States move forward only 40 percent of the time.

That’s because NWA proposals are still often deemed either more expensive or less reliable than the conventional reinforcement option.

Most identified NWA opportunities are not implemented

Wood Mackenzie defines NWAs as projects in which utilities use distributed energy resources (DERs) and other technologies to reinforce the grid, instead of relying on conventional transmission and distribution assets.

Regulations in some states encourage utilities to identify NWA opportunities whenever possible, but the decision on whether to pursue them is left to utilities’ cost-benefit analyses.

The pipeline of new NWA opportunities — those looming grid upgrades that could potentially be met through DERs, according to the assessment of the utilities that have identified them — is growing in the U.S. According to WoodMac data, NWA projects comprising a total of approximately 850 megawatts of power capacity in the have been identified or implemented across the country.

However, these developments have remained too slow-paced and infrequent to elevate NWAs to the level of a significant business opportunity for DER providers.

Most of these projects are in states where regulators mandate that utilities identify new NWA opportunities as part of their grid planning processes, such as New York and California. Indeed, these two states host 72 percent of the 321 projects included in Wood Mackenzie’s U.S. NWA database.

At the same time, as regulators push more utilities to report on a wider set of potential NWA projects, the proportion of NWA opportunities being implemented compared to the total identified in the database is shrinking. That’s because an increasing number of identified projects have little to no hope of moving on to the solicitation stage. 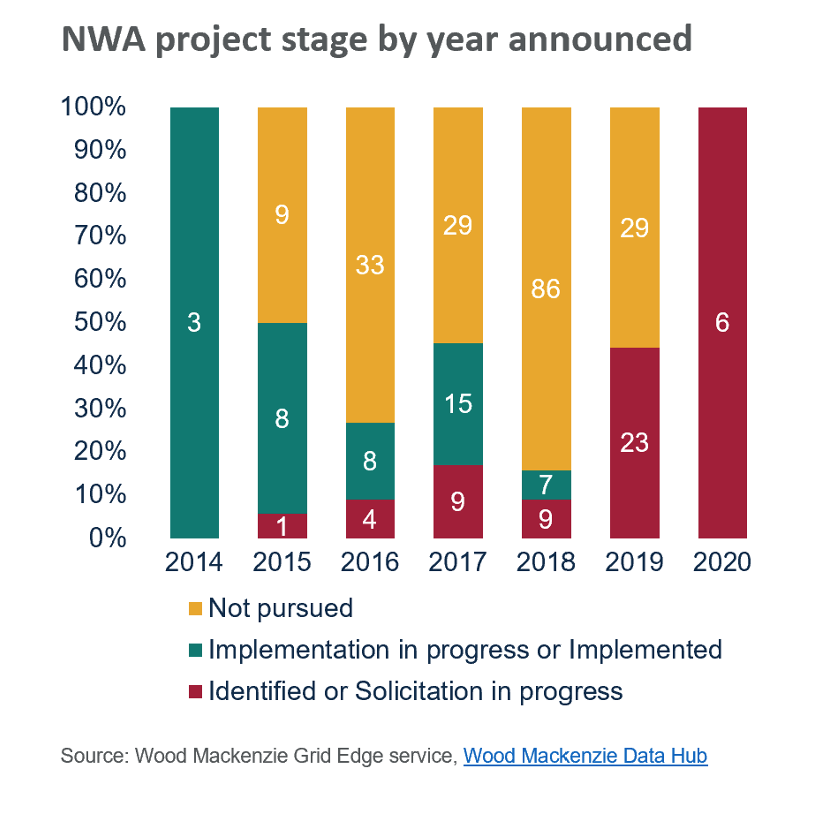 This situation has created a double-edged sword for the sector. On one hand, broad disclosure of NWA opportunities provides useful information for interested third parties, such as DER providers and utilities and regulators in other states.

On the other hand, this broad disclosure dilutes the share of NWA projects progressing toward implementation. This situation risks decreasing interest in NWAs from the same third parties, as projects only move forward in 40 percent of cases.

Cost and reliability concerns are the main factors that result in projects not being pursued.

Every NWA project is unique and presents its own specific challenges. The strength of relationships between DER providers and utilities is a major factor in determining whether NWA projects move forward, as are siting and permitting issues. All of this complicates relying on DERs for grid upgrades, even for those utilities that have openly committed to pursuing NWAs.

Declining DER costs and the development of new value streams for DERs via market design reform will be key enablers of greater penetration of NWAs on the U.S. grid over the coming years.

For example, Wood Mackenzie expects the implementation of FERC Order 841 to increase the feasibility of NWAs that use battery storage solutions.

The ability to value-stack by participating in wholesale markets will likely enable DERs providers to offer utilities a more attractive solution for their NWA projects.

Wood Mackenzie’s recent report finds that of those NWAs that do move forward, front-of-the-meter battery storage is the technology of choice.

Thanks to its greater cost-competitiveness compared to other resources, battery storage accounts for the majority of NWA project capacity currently under implementation in the U.S., and Wood Mackenzie expects FERC Order 841 will strengthen this trend going forward.