California’s distributed energy resources add up to gigawatts’ worth of capacity that could be used to prevent future rolling blackouts and balance the state’s increasingly clean-powered grid — if the state can compensate them for those services.

Wood Mackenzie’s latest report finds that California already has 4.7 gigawatts of flexible distributed energy capacity, or about one-tenth of the state’s peak grid demand. About half of that is residential electric vehicle charging, just under one-third is residential, commercial, industrial and agricultural demand response, and about one-tenth of it is behind-the-meter batteries.

By 2025, the flexible distributed energy resource capacity is expected to grow to 13.5 GW, including more than 11 GW of EV chargers and distributed batteries. That will equate to nearly 30 percent of projected peak demand, according to WoodMac’s report, “Market Design, DERs and the Future of Flexibility: Lessons From California’s 2020 Rolling Blackouts.”

As the title indicates, California’s first rolling blackouts since its 2001 energy crisis have focused attention on the resources that appear to have saved it from even more blackouts last month. Voluntary conservation delivered an estimated 4 GW of load reduction in the days after the rolling blackouts, ranging from military microgrids and ships to millions of customers cutting their electricity use.

But waiting for charity to save you from emergencies isn’t a strong foundation for future grid reliability. “You have to find ways to extract that flexibility in an intelligent way that’s valuable for both customers and for the grid,” said Elta Kolo, Wood Mackenzie’s grid edge research content lead and report co-author.

That requires “the right technology, both for customers and on the back end to express it to utilities,” as well as the programs and tariffs that enable residences, businesses and DER aggregators to invest in the technology needed to turn their behind-the-meter DERs into grid-responsive assets.

Last month’s rolling blackouts led to about 1,000 megawatts being shed on Friday, Aug. 14 and 470 MW shed on Saturday, Aug. 15. That’s less than the total amount of flexible DER capacity the state has now, Kolo noted during an episode of The Interchange podcast earlier this month.

“It’s a big claim to say we could have prevented the blackouts,” she warned, given the unusual, Western U.S.-wide heat wave conditions that led to them. Even so, she added, "We need to take a survey of the resources out there and see how we could better integrate them into operations.”

Take the nearly 1,500 MW of demand response state grid operator CAISO can call on to reduce electricity demand. Only about 200 MW of that is enrolled in programs that can respond within 15 minutes, said Isaac Maze-Rothstein, WoodMac microgrid analyst and report co-author — about the amount of time CAISO had between losing a natural-gas generator and instituting rolling blackouts on Aug. 15. Another 860 MW of demand response can respond within a half hour or so, while the remainder generally requires a day-ahead warning to be called.

Almost all of the fast-responding demand response in California is part of the Base Interruptible Programs run by Southern California Edison and Pacific Gas & Electric, which relies on commercial, industrial and agricultural customers willing to turn down power use to preset maximums or face financial penalties.

But WoodMac’s forecasts indicate that most flexible DERs will be residential EV chargers and behind-the-meter batteries, which can offer grid services that traditional load-shed-centric demand response programs can’t.

In fact, California’s traditional demand-response-focused approach to enlisting DERs for grid needs may be undervaluing them, Maze-Rothstein said. Rooftop solar on homes and businesses reduces their demand for grid electricity, which can undermine demand response baselining methodologies that determine how much their load reductions are worth.

Behind-the-meter batteries can only reduce host sites’ loads to zero, not inject stored energy back into the grid, and they face baselining complications that reduce their demand response value, storage and solar industry groups argue.

And EV chargers are highly unpredictable loads since they may or may not be charging when called upon. But today’s programs require their aggregators to offer predictions of their day-ahead loads, making it challenging to bid them as demand response.

These four providers collectively contributed 410 MW of load reduction in the week following the rolling blackouts, WoodMac found. That’s much more than the collective 126 MW of capacity they’re receiving resource-adequacy payments for under the DRAM program, indicating the gap between market-enabled capacity and what they can do in an emergency.

Getting the most out of DERs

Utilities and grid operators are cautious about relying on DERs. Demand response is inherently unpredictable, since participants may not reduce loads when called upon or may not be using as much electricity as they’d previously predicted. Not all batteries will be charged up enough to provide their nameplate capacity. And an uncertain number of EV chargers will be actively charging vehicles when grid emergencies arise.

Even so, there are some clear lessons to be learned from WoodMac’s data, as laid out in this chart. 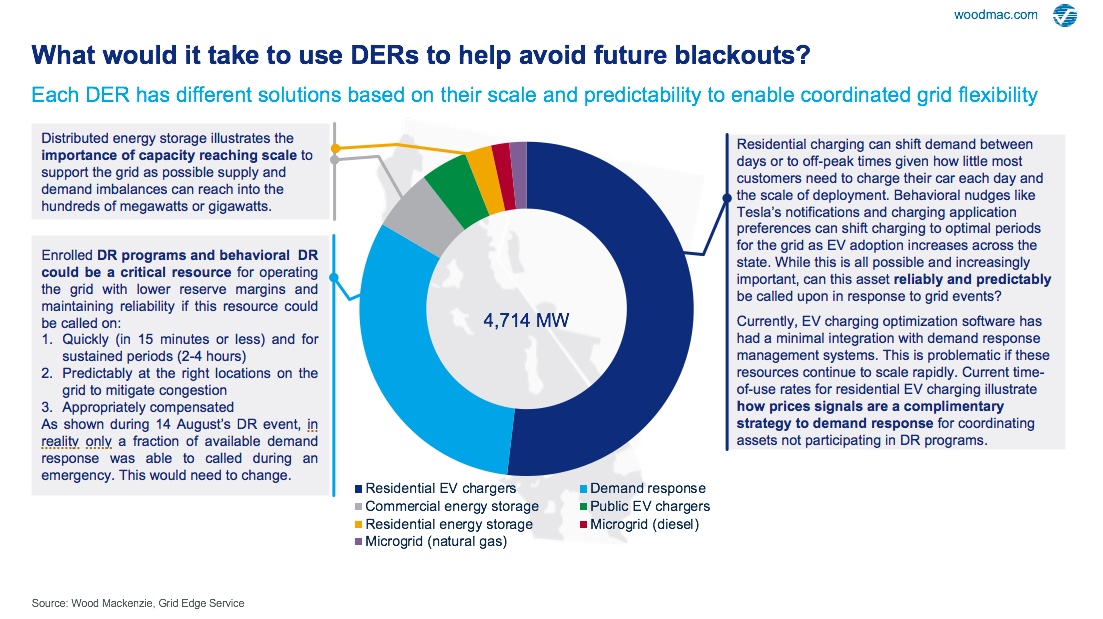 First of all, the EV chargers and distributed batteries that will make up the majority of the state’s future resources are capable of replying much more quickly to grid emergencies than the programs they’re participating in enables them to do.

Most vendors can respond much more quickly to utility or CAISO commands, Kolo said. “The partners the utilities work with have the ability to provide this information to the utility in real time.” But traditional demand response programs aren’t designed to work that quickly, leaving much of that responsiveness untapped.

Behind-the-meter batteries could be freed from baselining limitations or allowed to discharge to the grid, as storage industry groups have been seeking. Programs that pay batteries and loads to absorb excess solar generation at midday hours, such as CAISO’s Proxy Demand Resource-Load Shift Resource product, could also help reduce the supply-demand imbalances of California’s solar-inflected “duck curve.”

As for EV chargers, they’re already being subjected to time-of-use rates and tariffs that discourage peak charging. But they’re still under-represented as a demand-response resource, something that will need to change as they become a bigger share of grid demand.

Wood Mackenzie’s full insight on the August 2020 blackouts is available for purchase here.