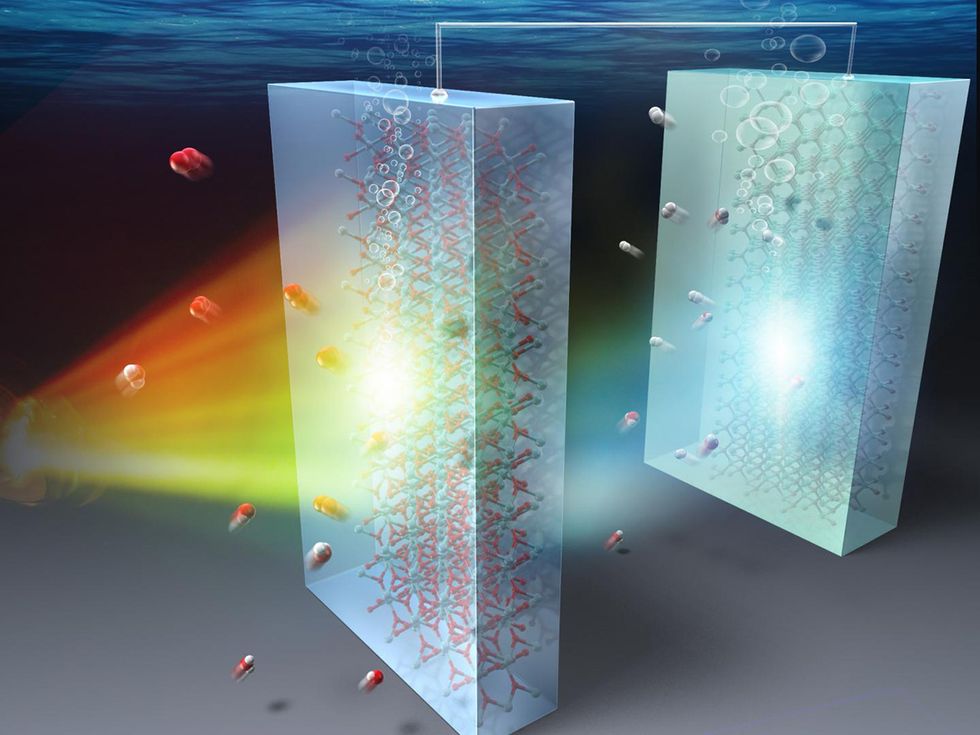 To split water into hydrogen on a large scale, we need technologies that are sustainable, efficient, scalable and durable. Using solar energy (or other renewable energy sources) to split water delivers sustainability, while recent research has made key inroads toward efficiency and scalability. Now Japanese researchers say they’ve made an important step toward durability.

Hydrogen today comes primarily from natural gas, which pumps out a lot of carbon and methane pollution into the atmosphere. By contrast, the sustainable solar-to-hydrogen approach has concentrated on photoelectrochemical (PEC) water splitting. In PEC systems, which nominally generate no greenhouse gases, special catalyst materials absorb sunlight to directly split water into hydrogen and oxygen. But these devices have also been limited by low efficiencies and lifetime. While previous PEC technologies have typically only lasted about a week, the new system is dramatically longer-lived.

“We confirmed 100 days durability, which is one of the longest periods among experimentally confirmed PEC water splitting materials,” says Masashi Kato, a professor of electrical and mechanical engineering at Nagoya Institute of Technology. Durability will be key for maintenance-free systems that can be installed at remote locations, he says.

Green hydrogen research and technologies have been gaining momentum around the world. Several companies and initiatives are making it by using wind or solar electricity to split water via electrolysis.

Direct solar water-splitting using PEC is a more elegant, one-step way to harness solar energy for hydrogen production. But it has proven challenging to do on a large scale. Devices aren’t cheap, efficient, or durable enough yet to move out of the lab.

Photocatalysts do the heavy lifting in PEC devices. Kato and his colleagues designed a tandem PEC device that uses two electrodes each coated with a different catalyst. One is titanium dioxide, a material commonly used in white paint and sunscreen, and the other is a cubic silicon carbide that Kato’s team has developed and reported previously.

The two catalysts absorb different parts of the light spectrum and work in a complementary way to split water. Titanium dioxide is an n-type photocatalyst, which soaks up ultraviolet light and generates electrons, triggering chemical reactions that produce oxygen. And the silicon carbide material the researchers have made is a p-type catalyst that absorbs visible light to produce hydrogen.

Together, the two reactions sustain each other for a while to split water into hydrogen and oxygen when a voltage is applied across the device placed in water. This results in the five-fold longevity boost over previous technologies to achieve 100-day operation, Kato says.

The efficiency of the system reported in the journal Solar Energy Materials and Solar Cells is relatively low at 0.74 percent. Most solar-to-hydrogen technologies have achieved efficiencies in the 1-2 percent range, but some research teams have achieved substantially higher efficiencies. Researchers from Italy and Israel recently reported a method that harnesses semiconductor nanorods topped with platinum spheres that convert almost 4 percent of solar energy into hydrogen fuel.

A Belgian research team at KU Leuven in 2019 reported a solar panel prototype that absorbs moisture from the air and splits it into hydrogen and oxygen with 15 percent efficiency. According to the U.S. Department of Energy, 5-10 percent efficiency should be enough for a practical solar hydrogen system.

Kato says that it’s the titanium dioxide electrode that limits the efficiency of the system, and the team is now looking for other photocatalysts to boost efficiency that would still work in concert with the silicon carbide electrode. However, the combination of durability and efficiency still sets their device apart, he says.