New climate migration modeling work projects increased numbers of people moving within their countries in the developing world—as many as 216 million internal migrants by 2050. The modeling completes work for the World Bank that was released in 2018 as volume 1 of Groundswell. The Climate School’s Center for International Earth Science Information Network (CIESIN) has once again partnered with the Bank, the CUNY Institute for Demographic Research, and the Potsdam Institute for Climate Impacts Research to model the remaining World Bank Regions. The completed work, now released in Groundswell Part II, focuses on three new regions—North Africa, Central America, and the Lower Mekong—and includes reviews of climate migration issues for small island developing states (SIDS) and the Middle East. The projected total of “climate migrants” by 2050 in the countries featured in Map 1 is between 48 million (at the low end of the climate friendly scenario) and 216 million (at the high end of the pessimistic scenario). 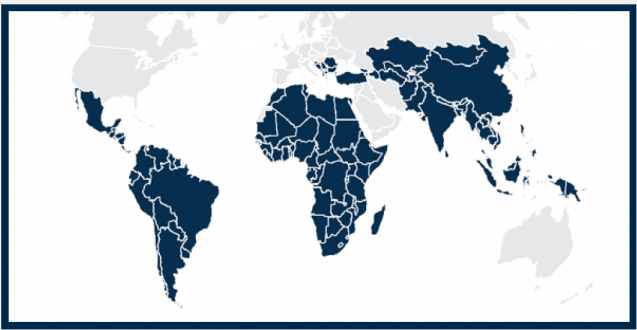 This work is based on a population gravity modeling approach that projects the future spatial distribution of population with and without climate impacts, focusing on sectoral impacts on water and crops. Looking at the difference between the two projections enabled us to infer population movements owing to climate impacts. An advantage of the Groundswell model is that it can project migration at far broader scales than is typically possible using alternative modeling approaches (e.g., agent-based modelling (ABM’s) or system dynamics models), and it produces helpful maps for policy makers to identify potential future hotspots of in- or out-migration (see Map 2).  In doing so, it puts a “human face” on climate impacts. While the likely geographic distribution and numbers of migrants are almost certain to be different by 2050 than what we project, the report and modeling work has effectively created space for dialogue with policy makers about the steps needed to prepare for likely increases in migration and displacement owing to climate impacts. (I address elsewhere that the term “climate migrants” is imprecise, and that they are best conceived of as distressed or mixed migrants who move at least in part owing to climate impacts.) 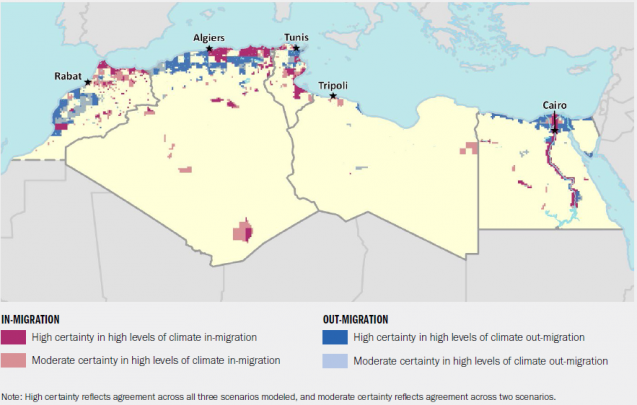 At the time of the 2018 release, I published a blog post on the need to prepare for climate migration and the policy options for doing so. In the interim, I’ve begun exploring in greater depth the ways in which development agencies are addressing climate mobility, and ways to improve this practice. Some of this thinking is expressed in an open access article in Population & Environment that I recently published with colleagues in Europe and the US. In that article we review development agency project documentation and reports to assess what approaches are being taken to address climate mobility, and what we should do.  Approaches that are currently being taken can be broken down into three categories:

Additional policy guidance in response to the Biden administration’s executive order on climate migration is available from this Refugees International Task Force report, on which I had the privilege to serve. The task force came up with two bundles of measures—one designed to minimize the need to migrate and another to provide protection for displaced persons and migrants—that reflect many of the same approaches mentioned above.

In a more forward looking vein, my co-authors and I recommend three types of action. One is to move beyond the investigation of physical climate impacts to look at social feedbacks, or what is sometimes termed social tipping points, that may increase or decrease the propensity to move. This will require a better understanding of how development and adaptation interventions may be helping or hurting communities that want to stay in place. Another is to support urban centers as receiving areas of climate-induced migration and displacement, and to upgrade slums and squatter settlements that are often the first place of arrival. Lastly, it will be important to leverage transnational migrant ties for development, including promoting the role of remittances in supporting resilience and those who remain behind.

There are a number of other recommendations in the Groundswell Policy Summary. Groundswell has been criticized by some who believe that it raises the specter of “climate refugees” to try to raise the level of support for greenhouse gas emissions in developed countries. While the plea to reduce emissions is the first recommendation—mostly because projected levels of migration are so much lower under lower emissions scenarios—the critique is misleading since the work solely focuses on internal migration within developing countries. The reality is that the transboundary climate-induced migration that will occur is more likely to be between countries in the global South, who already disproportionately bear the brunt of the climate impacts resulting from the North’s fossil-fueled development since the dawn of the industrial revolution. We owe it to those countries and to the migrants to dedicate more development assistance to addressing the needs of those displaced by climate change.

Alex de Sherbinin is an associate director and a senior research scientist at CIESIN, and a lead author on the Groundswell report series.

via State of the Planet https://ift.tt/3A6QMYC