Hydrogen Demand: Hydrogen Is Not A Growth Market, It’s A Diminishing One (Part 1 Of 3)

Hydrogen continues to be a heavily discussed area in the low-carbon transition. Michael Liebreich just updated his excellent hydrogen ladder, and unlike others including me, has made his conditional peace with blue hydrogen. Paul Martin continues to publish and discuss why hydrogen is a decarbonization problem, not a decarbonization solution. Mark Z. Jacobson has published a study with Robert Howarth that I agree with, but Liebreich doesn’t, on the significant carbon emission increases if ‘blue’ hydrogen were to be used.

It’s worth quoting Liebreich from his recent LinkedIn post asserting his reasoning:

“This is why I have made my peace with blue hydrogen. I simply cannot see sufficient quantities of green hydrogen being produced fast enough and with low enough environmental impacts to meet demand – even though I believe only those use cases high up my ladder will materialise.”

I agree completely with the unlikelihood of green hydrogen being able to meet increasing demand for hydrogen. Where I disagree with Liebreich is that I project substantial decline in hydrogen demand. I have been asked to do a projection out for a few decades of a likely scenario by several people, just as I’ve done for other key areas such as oil demand impacts related to electric vehicles, vehicle-to-grid penetration, and the market for grid storage. As always, these are thought exercises with my point in time knowledge as someone who continues to guide companies through the thickets of long-term value creation as we move toward our decarbonized future, not predictions of exactly what will occur. At very best, all projections of the future are through a glass, darkly. I will be wrong in interesting ways, but I think I’m more right than wrong. Hydrogen demand through 2100 by author

And so, my projection. Let’s start with the list of demand points I bothered to list. Liebreich’s ladder has 35 use cases for hydrogen across seven levels of his ladder, from unavoidable to uncompetitive. A big point his ladder does not address is the variance through time of his ‘unavoidable’ category, something he and I have started a discussion on, one we’ll hopefully be able to have on CleanTech Talk soon. 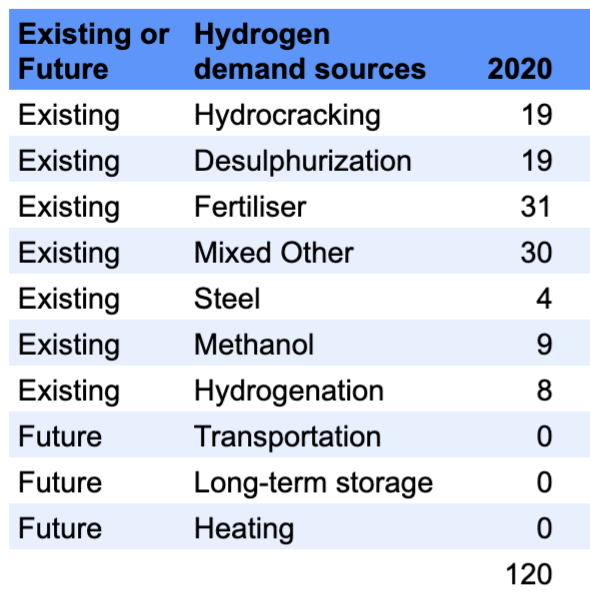 The 10 points of demand start with the dominant current uses, with overlap from Liebreich’s ladder and IRENA’s 2019 assessment of the current hydrogen market. I had been using the IEA’s breakdown, but as Martin pointed out in our discussion, IRENA’s captures a great deal of hydrogen that is created in mixed chemical form which is also essential to understand, something the IEA excludes. The future projections are ones that many are promoting today as decarbonization solutions, and collapse large numbers of Liebreich’s ladder into three categories.

To be clear, some things in his ladder, such as fuel for vintage vehicles, will be produced, but I consider the volumes to be immaterial and so collapse them, along with all forms of transportation, into a single component. Four years ago my perspective was that hydrogen had not yet proven itself to be non-viable for long-haul shipping and aviation, but four years has been sufficient to convince me that it isn’t viable in those modes either.

It’s worth going through each of my 10 categories and explaining what they encompass and my logic, as this piece is intended to trigger discussion, debate, and inevitably corrections as well. A bread crumb trail of reasoning is useful in that regard, both for me to remember my own thinking, but also to allow others to point out errors more readily.

Desulfurization (Hydrotreatment) & Hydrocracking: From 38 Million Tons Down To 2 Million

Liebreich separates these, while others put them together. I wasn’t able to find a breakdown in IEA or IRENA literature or other sources for them individually, so have chosen to show each of them with 50% of the current 38 million tons of demand. (Please reach out if you have a source with a better breakdown of the two.)

As I published a while ago, these are uses of hydrogen in petroleum refineries, and represent the only growth market in the past 30 years for the molecule. Desulfurization of fuels was required due to acid rain and other air pollution, although Martin points out that despite a requirement for using desulfurized fuels in long-haul shipping, there was exactly zero movement in the market for the leave-behinds of the refinement process that most oceanic freight ships use for fuel, so he suspects that it’s a widely ignored rule out of sight of land. Hydrocracking converts heavy fuel oil components into naphtha, kerosene, jet fuel, diesel oil, or high-quality lubricating oils.

As I commented on Liebreich’s post regarding any expected growth in hydrogen demand, if we aren’t substantially lowering our use of petroleum-sourced fuels in the next few decades, we aren’t solving climate change. With Equinor and McKinsey both projecting peak oil demand in the next decade, and the 400,000+ electric buses in China already eliminating demand for 270,000 barrels of oil every day, there is no world in which hydrogen consumption in refineries stays the same in the coming decades or global warming is even slowed.

Fertilizer: 31 Million Tons Down To 5 Million

This is a big demand area, and we will continue to need to provide nitrogen to crops to feed our billions, even as population peaks. But hydrogen demand for ammonia has been flat for three decades despite massive population increases, so it’s not a growth market. Further, ammonia fertilizer is made from black hydrogen today, with roughly 3x the mass of CO2 as of delivered fertilizer, and much of nitrogen in the fertilizer that was originally part of the 78% of nitrogen in our atmosphere is transformed by soil biological processes into nitrous oxides with global warming potentials 265x that of CO2. In a recent discussion with PhD and CEO Karsten Temme of Pivot Bio, he estimates another 6x of CO2e in the form of nitrous oxide. In other words, every ton of fertilizer represents roughly 9 tons of CO2e emissions, making fertilizer use in agriculture one of the largest single sources of annual CO2e emissions globally, roughly 10%.

That means that hydrogen for fertilizer isn’t a demand area, it’s a problem area. And there are solutions. I’ve assessed and continue to assess agricultural transformation to deal with its emissions, and I see three. The first is low-tillage agriculture, where instead of plowing furrows into fields at end of harvest, allowing most of the temporarily sequestered carbon to escape and then laying down a thick layer of fertilizer, cover crops are left in place, and cash crops are planted by poking individual holes into the ground to seed. This intersects with another major trend, and a reason why fertilizer (and pesticide and herbicide) demand has been flat — precision agriculture. This model uses computers and GPS to put seeds, fertilizer, pesticides, and herbicides in the exact places needed, with measured doses, instead of covering a field with a thick layer of fertilizer, most of which doesn’t usefully help crops grow. GPS, computers, and automated delivery systems are cheap and reliable, so will spread rapidly. The third trend is the increase in biogenetic fixing of nitrogen. Temme and Pivot Bio engineered pre-existing soil microbes to continue to emit nitrogen even in the presence of lots of fertilizer, and are already diverting 20-25% of fertilizer use with 6-7% crop yield increases on a million acres of corn. They are targeting 100% by 2030, an admirable goal, with the three largest cereal crops — corn, grain, and rice — in their sights. And they aren’t alone in the space.

The combination of the three major trends clearly indicates to me that the age of massive fertilizer use is coming to an end, and so I project it to diminish from its current 31 million tons of hydrogen demand annually to 5 million tons by the end of the century.

And so much for Part 1, where the two biggest consumers of hydrogen today are found to be disappearing rapidly, not persisting, and definitely not growing — not a good sign for the hydrogen economy. In Part 2 I explore several hyped uses that are going to fall very flat, and the one real growth demand area.